Cal Pappas has emerged as one of the world’s true authorities on double rifles, and, being a retired teacher, he combines this passion with the ability to write well, capturing and holding the attention of his readers. The cognoscenti will have come to appreciate Cal’s ongoing input into online discussion forums like Accurate Reloading, and his past contributions to our knowledge of the classics in The .600 Nitro Express and The British Bore Rifle. The Double Rifle Primer is his latest offering, and he speaks true when he says “When shooters gather and discuss rifles, often they will talk on craftsmanship and quality, hunting dangerous game on the Dark Continent of Africa, big bores, or any number of topics. Of all the forms and types of rifles made in the last few hundred years none equals the double rifle. No finer firearms exist than a best quality double rifle.”

Cal doesn’t see himself as a technical writer, though anyone who delves into something as deeply as Cal has double rifles becomes over time the go-to source for information for many, and I have always been in awe of the depth and scope of his technical knowledge. Cal modestly says that what he does is to take shooting and hunting with double rifles out of the technical world and place it into the practical world. That his knowledge is practical makes it all the more relevant. Cal doesn’t just write about, say, a .600 NE – be brings it to Africa, carries it around all day, and hunts with it. In the months leading up to his safari – probably years, in fact – he will have spent hours at the reloading bench and on the range, getting the very most out of whatever rifles he will be using. I first had the pleasure of meeting Cal when he was in Africa a couple of years ago to go on a hunt with a beautiful old John Wilkes .600 Nitro.

Cal was familiar with what John PondoroTaylor had to say about the .600NE’s knockout value – he cites African Rifles and Cartridges as his favourite book – and in June of 2013 he put Taylor’s claims to the test on the Chiredzi River with PH Andries Kotzie on Barry Styles’ Buffalo Range Safaris. Cal says “I have always been interested in a comment of Taylor’s. He states, ‘A .577 will keep an elephant down for anything up to about twenty minutes; a .600 for close on half an hour.’ Many have disputed this as fact and many read it, as did I, with interest but no actual experience or proof.”

Early one morning, Cal came upon some hippo slowly moving out of the water to sun themselves on a small island in the river. For an hour or so he watched from the high bank as the herd ever so slowly moved into the sun. One bull stood out among the rest. Mainly because of how scarred he was; he was small enough to have been a cow. Cal watched him for nearly an hour, and eventually concluded that the small bull was blind. Cal already had his hippo trophy from a hunt in the Selous in 2006, so he decided to take the blind bull.

Cal continues “I aimed for the centre of the triangle between his eyes and the top of his head and gently squeezed the trigger. The perfect brain shot! The hippo’s legs folded up under him and he dropped straight down. About ten minutes had elapsed and what did I see? The hippo began to kick and try to get up! There was nothing else to do but to shoot again in wonderment, which I did – twice – and the hippo breathed his last. Or so I thought. He stopped kicking with a pair of shots to the neck. A quick left and right and he was again still. After nearly the same ten minutes, perhaps a bit less, he began to kick again. Two more shots in his body finally put the quietus to him. Now, I had some detective work to do.”

“On shore and we began the task of cutting him up for camp meat as well as to check for the paths of my bullets. The final body shots were easy to locate but the head shot was bit to the left. The neck shots would be found later upon skinning the head in the skinning shed. Here is what was found: the brain shot was to the left of centre and missed the brain by a small amount. This shot knocked the hippo down and out instantly as if brained in the truest sense. He was not dead, but he was out – for ten minutes. Of the next two shots, one went through his neck, passing through soft tissue and did no real damage. The second neck shot was basically the same as the brain shot as to instant results. The 900 grain Woodleigh solid hit the spine and broke the vertebrae but did not sever the spinal column. Again, the shock of the bullet knocked the bull down and out, but not dead! The final two body shots penetrated the heart and lungs and he was done. Finally. In my own amateurish way, Taylor’s theory was proved correct. Who can argue with Pondoro Taylor?”

My point here is that Cal Pappas walks the talk, and this is the sort of author we should be reading. In The Double Rifle Primer, Cal treats you to 182 pages of fact, lore and technical specs on the world’s finest doubles and the ammunition that was made for them. He goes into the vagaries of buying and selling a double, reloading for a double, and shooting one of these fine old classics. The text is augmented with dozens of the highest quality colour photographs to round out the package.

Cal Pappas is a man who doesn’t do a thing if he is not going to do it right. This quest for perfection has come through in the extremely high quality of his other titles – hard cover, the best glossy paper and superbly illustrated dust jackets.

So give Cal a shout directly on pappas@mtaonline.net for price and shipping information – you will be very happy you did.

WHAT IS FIREARM PROFILING? by I J Larivers 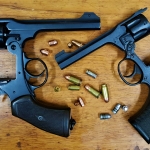 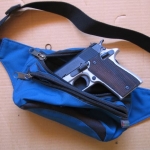