News
You are here: Home / News / Industry News / WHAT IS FIREARM PROFILING? by I J Larivers

A few months ago, Central Firearms Registry embarked upon what they term a profiling exercise. The purpose is to collect forensic ballistics data on all licensed firearms in Zimbabwe. This will give the police a better chance in the future of identifying firearms which may have been stolen and recovered, or have been used in crimes. It will also allow firearm certificates to be physically compared to firearms and any irregularities detected – for example, an FAL or SLR rifle which has been licensed as a .308 carbine. We believe the profiling exercise is a good thing.

Central Firearms Registry is asking that firearm owners bring each of their guns to CID Headquarters, along with three (3) rounds of ammunition for each firearm; in the case of double rifles or double-barrel shotguns, three rounds must be provided for each barrel. The applicant will also need proof of identity and the original firearm certificates for each gun. Upon arrival at Ballistics section, each firearm certificate will be endorsed with a reference number which is also recorded in a master ledger. In this way, CFR will know that a licence which is later being submitted for re-licensing pertains to a gun which has already been profiled. Or not. At the completion of the exercise, a certificate of profiling is then issued in respect of each firearm tested, which the owner is urged to keep filed with their Firearm Certificate.

CFR will still re-licence a firearm which has not been profiled, but the new Firearm Certificate will be endorsed to the effect that profiling must be done within three (3) months.

If the arms and ammunition are delivered to the Ballistics section as early as possible in the morning, the testing will be done during the course of the day, and the guns may be collected on the afternoon of the same day. It is adviseable not to leave your firearms at CID HQ overnight.

The staff at Ballistics is extremely professional, and they are trying hard to do a good job. Still, this is a new exercise, and there is always room for error; toward the end of May two very expensive heavy calibre double rifles were damaged by the profiling process, when they were fired into the bullet trap.

Central Firearms Registry does not charge for profiling.

Stronghold Arms will undertake to have clients’ firearms profiled, for a fee. We will need the firearms, ammunition, owner’s ID and current firearm licenses to be dropped off at our offices by 09.00. We will then take them to CFR, have the process done, and go back to collect them the same afternoon. The client can then collect them from our offices, together with the profiling certificates, at the end of the day. Because anything that happens while the guns are at CFR is beyond our control, we also require an indemnity form to be signed. (This does not indemnify Central Firearms Registry in any way, only Stronghold Arms.) 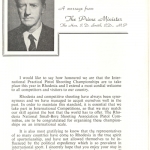 THE DOUBLE RIFLE PRIMER by Cal Pappas
Scroll to top