News
You are here: Home / News / Industry News / STRONGHOLD IS IN THE PROCESS OF JOINING TRACE!

TRACE International is a 501c(6) non-profit business association founded in 2001 to provide multinational companies and their commercial intermediaries with anti-bribery compliance support.

TRACE is financed by its members and does not accept any government funding. It leverages a shared-cost model whereby membership dues are pooled to develop anti-bribery compliance tools, services and resources.

Founded in 2007 to meet compliance demands that did not fall within the scope of the shared-cost membership model, TRACE Inc. provides both members and non-members with customizable risk-based due diligence and has conducted over 500,000 due diligence reviews worldwide.

Most cases in the TRACE Compendium are Foreign Corrupt Practices Act (FCPA) enforcement actions brought by the U.S. Department of Justice (DOJ) and/or the U.S. Securities and Exchange Commission (SEC). The TRACE Compendium also includes the growing number of international anti-bribery enforcement actions brought by authorities outside of the U.S., particularly amongst signatories to the OECD Anti-Bribery Convention.

Stronghold Arms and Ammunition has a ZERO TOLERANCE policy toward corruption.

WHAT ARE “OUTLAW” SHOOTING SPORTS? by I... 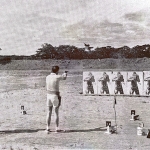 GLOCK FOR SALE
Scroll to top